A literay gathering at Paschimbanga bangla academy, Jibananda Sabhaghar. On 6th January, 5 o clock in the afternoon, all are welcome. All India PEN , West Bengal . India
http://penwestbengal.blogspot.com/2008/12/all-india-pen-center-west-bengal-appeal.html
Posted by Albert Ashok
at December 17, 2008 No comments:

English PEN is seriously concerned about the detention of Guo Quan, Internet writer and activist, who has reportedly been held on charges of 'inciting subversion' since 13 November 2008.

According to our information, Guo Quan was arrested at his home in Nanjing, capital of Jiangsu province, on 13 November 2008. His wife reports that he has been charged with 'inciting subversion of state power', a charge commonly used to suppress dissent. It is feared that he may be detained for the views expressed on his web blog, in which he allegedly called for democracy and criticized the Nanjing government for its decision to build a chemical plant in the city. Others suspect that the charges could be linked to his role in organizing a new political party, the China Xinmin Party, in December 2007.

At the time of his arrest, the police confiscated Guo Quan's articles and his computer. It is believed that Guo Quan is currently held at Nanjing City Public Security Bureau.

Guo Quan has been previously arrested by the Chinese authorities. For example, in May 2008 he spent ten days in prison for 'violating of public order'. He is a professor at Nanjing University, however, due to his political activities he has been banned from teaching.

- Expressing serious concern at the arrest of Internet writer and activist Guo Quan;- Calling for his immediate and unconditional release if held in violation of his right to freedom of expression, in accordance with Article 19 of the International Covenant on Civil and Political Rights, to which China is a signatory.
Appeals to:
His Excellency Hu JintaoPresident of the People's Republic of ChinaState CouncilBeijing 100032P.R. China

Please note that there are no fax numbers for the Chinese authorities. As such, we recommend that you copy your appeal to the Chinese embassy in the UK asking them to forward it and welcoming any comments:

All India PEN center, West Bengal : an appeal to all citizens of India 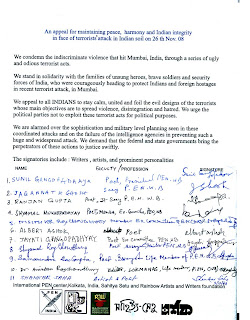 Today, West Bengal Indian PEN center has expressed an appeal to all Indian citizen in presence of all its members and other organisations ( see photocopy above and the word form below)
It is an expression of our anger and an appeal for maintaining peace, harmony and Indian integrity in face of terrorists' attack in Indian soil on 26 th Nov.08
" We condemn the indiscriminate violence that hit Mumbai, India, through a series of ugly and odious terrorists act.
We stand in solidarity with the families of unsung heroes, brave soldiers and security forces of India, who were courageously heading to protect Indians and foreign hostages in recent terrorists attack, in Mumbai.
We appeal to all INDIANS to stay calm,united and foil the evil designs of the terrorists whose main objectives are to spread violence, disintegration and hatred.
We urge the political parties not to exploit these terrorist acts for political purposes.We are alarmed over the sophistication and military level planning seen in these coordinated attacks and on the failure of the intelligence agencies in preventing such a huge and widespread attack.
We demand that the federal and state governments bring the perpetrators of these actions to justice swiftly."
The signatories include: ( writers, artists and prominent personalities)
Signs are collected from all over west bengal.
Co ordinators : Sahitya Setu and Rainbow Artists and Writers Foundation

About 500 Intellectuals from different communities like religious, social and political: Writer ( mostly Editor, Poets , Novelists and Essayist) Film Maker, Singer, University Professors , Stage Actor have signed on this appeal of/to solidarity . Its a great bond of Brotherhood in face of abominable, heinous terrorists conspiracy and attacks. We are ready to weed out any fanaticism, communalism and conspiracy to save the lives and integrity of Indian Soil.

A few names signed mentioned below:

Posted by Albert Ashok. Kolkata India The news reflects on the link below 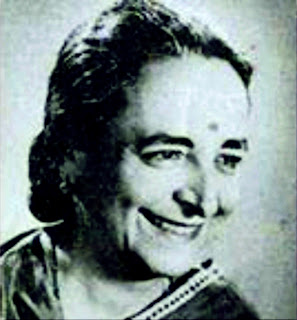 BLOGGER code 7
'Blogger code 7' is a painter, an author and an activist of Human rights. He writes on art, literature and human rights. he publishes most of his writings in different types of blog posts.